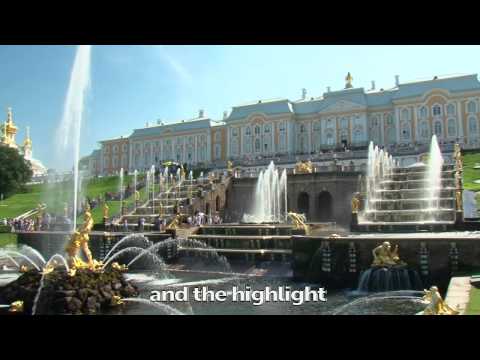 Your journey starts with a transfer to Peterhof, the town of palaces, fountains and parks, built by Peter the Great to rival Versailles. It lies on the southern shore of the Gulf of Finland, 22 miles west of St. Petersburg. The Grand Palace, built in the beginning of the 18th century, is known as the most brilliant of all the summer residences of the Russian Tsars. The estate construction spanned two centuries and upon its completion, it encompassed seven parks and more than 20 smaller palaces and pavilions.


The layout of the 300 acre park and spectacular fountains was designed by Peter himself. The Grand Cascade, often considered the chief delight of the grounds, consists of three waterfalls, an avenue of 64 fountains and 37 gilded statues. Samson, the main attraction of Peterhof, is located at the base of the Great Cascade. After your tour of the Grand Palace, you’ll proceed to the magnificent gardens of the Low Park to admire the numerous fountains and statues of the Grand Cascade.


As part of your tour, a special hydrofoil boat transfer has been arranged for you. It will take you from Peterhof back to the city center, on a short 30 minute ride across the Gulf of Finland. After arriving back in town, you’ll be taken to the Spit of Vasilievsky Island, where you’ll enjoy views of the city including the Hermitage Museum and Peter and Paul Fortress, which you will tour next. Once inside the Peter and Paul Cathedral, you’ll be surrounded by marble columns, glittering chandeliers and painted decor, combined with carved and gilded iconostasis to create a magnificent setting for the tombs of Romanov monarchs. You'll also have some free time for shopping.

Note: This tour is not recommended for persons with walking or climbing difficulties due to long walking distances, cobblestones and gravel paths in the Peterhof Gardens and the Peter and Paul Fortress. The Grand Palace is not wheelchair accessible due to narrow staircases and no elevators. Visit to the inside of Peterhof Palace is approximately one hour. Expect congestion and waiting at attractions. The hydrofoil is dependent upon weather and logistics; it may be replaced by a bus transfer back to the city without prior notice. Photo/video is not allowed in the Grand Peterhof Palace. A visit to the Hermitage is not included; it is just an outside view while you tour the city.

Tours with this activity level involve a considerable amount of physical activity such as substantial walking over cobblestone streets, uneven or steep terrain, climbing stairs, or extended periods of standing. Not recommended for guests with physical limitations. Comfortable, sturdy shoes are recommended.